On building showreels, skillsets and meaningful worlds in the metaverse. 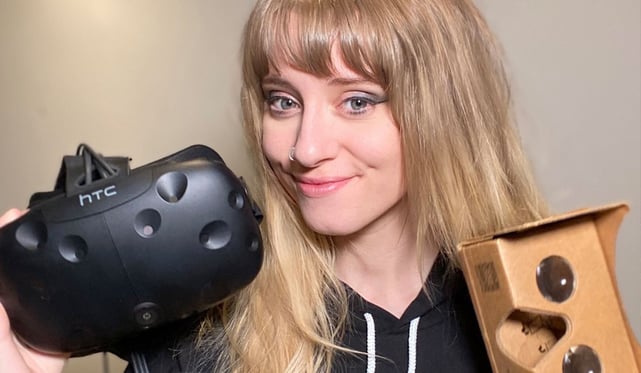 Hey Rosie. Tell us about what you do.

I spend the majority of my day inside the metaverse. I create games, I’m a 3D animator, I work in game engines, I do art in virtual reality. I often say that I use space as a canvas. And I get to work on some really exciting projects with some very exciting people.

Traditionally I am a fine artist – I came from painting with oils and on a canvas. When you work in 2D you spend all your time being limited by frames, by set dimensions. But when I put on a headset and started painting – wow – my paint strokes were defying gravity. They were just hovering in the space around me. I could walk around them. Suddenly my paint strokes had tangibility. That was like a pivotal moment for me as an artist, because I realised I should start painting worlds from the inside out and start living inside my artwork. As a storyteller, that was what particularly excited me – I can make stories happen around me.

Everything you know as a traditional artist gets thrown out the window really when you cast with VR. It’s not just the fact you’ve got a whole world to consider, rather than just a frame. It’s the colours too. I noticed that if I was painting certain colors digitally, and then I took that color palette into VR, I got a different mood that I didn’t quite intend. In VR, it was just more powerful, too powerful. So I had to tone things down a bit, so I could exist in that space how I had intended.

What was the first thing you created in VR?

That’s a question I ask people a lot! And frequently people’s answers, like mine, are fires, which is such a primal thing. As though you need to build a fire in a new world you are building. I made a fire and an ocean next to it. I just sat next to this little campfire, and then looked out to the sea and remembered feeling “Oh my gosh, I feel like I’m actually here right now. Where’s my marshmallows?”

"The biggest thing I consider when I create spaces and world build is – is this going to be a nice space for everyone? Is it going to be comfortable for people?"

What was the process of getting to where you are now - working in a studio and doing your own projects?

I was studying animation at uni and when I came into contact with VR I was just – “wow! This tech is amazing, I need to pursue this.” So I started experimenting with virtual reality art tools, like Tilt Brush and Quill. When I left uni I got a job at a VR game studio where I work as an animator.

I felt like I got very lucky. I just graduated, I had a showreel of all my work and I was contacting loads of studios. I’d decided I really wanted to work up North, because that’s where I am based – and then I found this VR studio in Leeds which was 10 minutes away from me. I applied, they liked my stuff and that’s when I landed my first junior role. I think a lot of it was timing - I was lucky that I got my CV in at the time they were recruiting. It feels like fate was on my side. It was my first time ever in the industry and I learnt so much. Just getting to grips with pipelines and workflows was huge.

That’s when I realised that so much of what I was doing was like painting, and that’s when I branched into VR performance as well. I started doing events, performing in front of audiences and now my world has branched out into so many different sectors - VR gaming, VR art, VR performance.

You mentioned your showreel. I’m curious - how do you think about building yours?

I wanted to show a mix of what I could do, because obviously I’m an artist, but I could also use game engines as well. I wanted to show I could multitask, but there was a risk I came across as a Jack of all trades, master of none. So I was - and always am - very selective about what I put in it Most of it was demonstrating all the principles of animation, but I also showed I could integrate that into games engines.

I had to be careful that I didn’t show I could code, because I don’t. I’d love to learn code – when I see a coder whizzing around, it looks like magic to me – but I’ve always just ended up focusing on the art side and just collaborating with people who can bring the other skills needed. Collaboration is at the heart of so much of what I do. An artist and developer working together can make some amazing virtual reality interactive experiences. And a sound designer too – it’s so often overlooked, but it really does help an experience come alive.

We have a little hub up here in the North - a meetup called VR Manchester. We run hackathons, where a bunch of us  - coders, artists, performances, actors - put our heads down for three days and hack away at something. So many fantastic things come out of it because it’s just that raw collaboration of skills and amazing ideas. It’s exhausting, but what we make at the end is always so fun, and so rewarding. It’s things like that that I have really missed because of Covid.

There are clearly so many skill sets required in your role. What are the most important?

One of the key things is understanding 3D space. Understanding more than two dimensions can be tricky to get your head around if you haven’t worked in it before.

Patience and perseverance is a pretty valuable skill too. Being able to troubleshoot and diagnose problems, developing a really thick skin for the amount of issues you might face. I’ll sometimes think I’ll never get over the feeling of putting on a VR event and then finding you’ve got tracking errors or something else is going wrong.

Mostly, I think one of the biggest things is having a passion and love for VR. That’s what’s driven me through learning and picking up skills I need, because I just love it.

"I think one of the biggest things is having a passion and love for VR. That’s what’s driven me through learning and picking up skills I need because I just love it."

How do you balance learning so many new skills with deadlines?

I’ve had to do it for years now so I’ve just gotten used to it. But one example is mixed reality – I had a huge demand from clients for it, so within the space of a month, I had to really knuckle down. That’s when I did Inktober [the drawing challenge] in mixed reality. Every day I did a mixed reality performance, so by the end of the month I’d spent 31 days in VR, and that way I learnt how to overcome so many of the technical issues. Those were exhausting hours, and I would not have been able to put that energy or time in if I didn’t really love it.

You, like so many others working in VR, really are building brand new worlds. Which is a big societal responsibility. How do you think about that?

It’s a big question. You’ve got to be really careful, because what you create can have a big effect on people, people can actually think that it’s real. I’ve had experiences before where someone was just like? “Hey, look at this.” I got a headset in my face, and was presented with a person in a coffin. What if I just had a relative that recently died? That could have really affected me.

The biggest thing I consider when I create spaces and world build is – is this going to be a nice space for everyone? Is it going to be comfortable for people? When I started painting, I always tended to paint like positive things, like nice happy trees, with nice clouds, and happy positive things. Because I exist in the space and being in that place of course does have an effect on my mood.

I was never an environment person before VR - it was all about characters and animation – but when I started painting in VR, it flipped that upside down. I wanted to explore worlds and environments. I have to consider where things are going to be in the space. Is it going to be disorientating for someone? How big or small are things going to be? And so, so much more. A really important skill in all this is to be able to put yourself in other user’s shoes, not just yourself. If you’re going to have an experience which is a little bit uncomfortable, then you have to make it known before you put a headset on them. We all have the element of responsibility there.

What advice would you have for someone thinking of moving into 3D and VR?

No one’s an expert yet. We’re all learning and playing, and so this is the best time to get involved with something like this, because you have a chance to forge its future. You can start putting your fingerprints on something. Just playing and experimenting has really allowed me to adapt to the tools really fast and figure out ways in which this can enhance my creative process. So, that’d be my biggest thing - get experimenting. There are tools out there which can allow you to be your creative self without forcing you into an engineering form.

You can see more of Antonia’s work at rosiesummers.com