Why job titles don’t always tell the whole story - and her process for crafting visual stories. 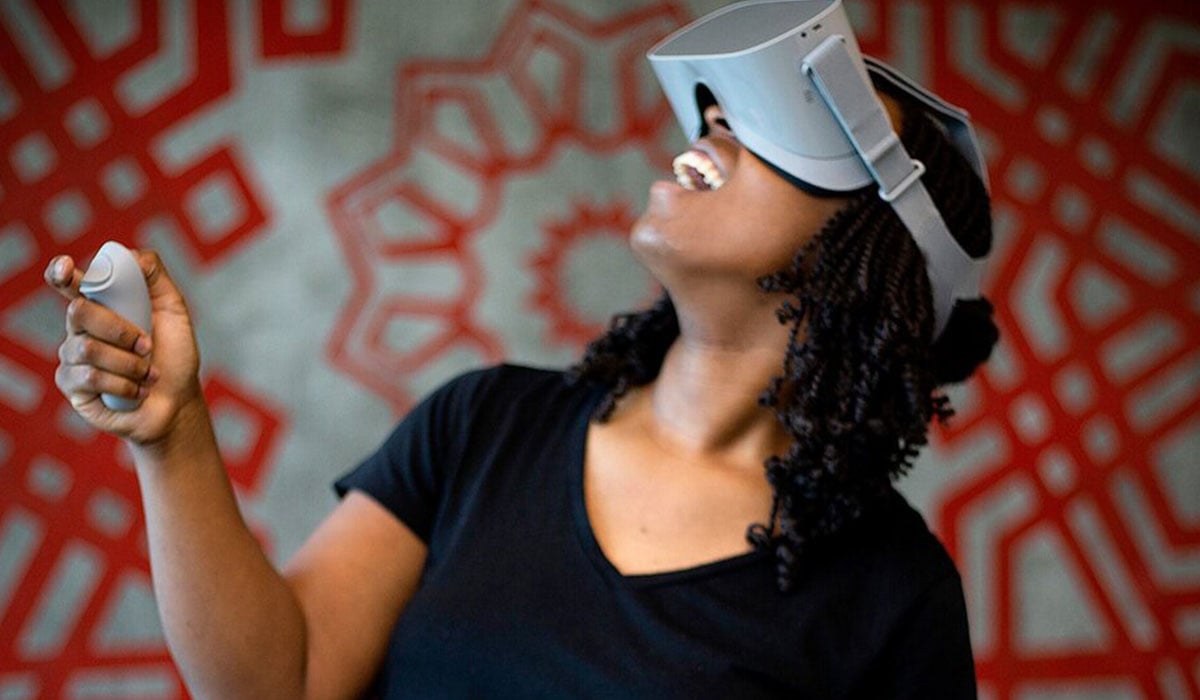 Tell us what you do Kathryn.

I call myself an AR/VR designer. I create 2D and 3D assets for immersive experiences, whether it's 3D modeling, UI design, lighting & rendering, etc. I'm kind of a weird 3D generalist, in a way.

Currently, I'm working on a VR game called Mend. It's a VR co-op platformer game where VR players and standard PC players can play together. I create the 3D assets for the environments in the game, texturing, 3D modeling, paintings, etc., and make sure they are all in the style of the game.

It's everything I want in terms of a career path. It's an amazing field to be a part of.

How do you start the process of building these elements?

I get handed the concept art, but I do a lot of research in terms of the visual side of things. Pinterest is one of my best friends for references and mood boards. I make sure I get a collection of images, photographs, colors, and shapes relevant to the project and make sure it matches that look and feel.

I would research bone structures and how the body looks and things like that in the past, where I've worked on medical and training device projects. When it comes to these projects, you want to make sure it's realistic but not too realistic – you don't want to gross people out - so I try and make it feel a little more magical by adding a unique visual style.

How do you balance your own artistic style with that of the game you’re creating?

Good question! I do have a sense of my own style, but I don't really notice it that much. I feel like I can adapt to the different styles. As a kid, I used to draw and try to replicate certain styles – and so I guess that's how I work with 3D modeling and texturing.

"I love the feeling of being inside immersive tech and creating objects, environments, and worlds for it. It's a very transformative medium. It's almost like Legos in a way – but once you've built the world, you get to be the figurine inside it."

What software are you working in on a day-to-day basis?

I use Unity for the game engine software, and I've used Unreal too. I am currently using Blender a lot, and Cinema 4D too. I also use Topogun for retopology [which is the process of converting high-resolution models into something much smaller that can be used for animation]. I use that as well as Headus UV Layout for setting up textures.

I like to think of this process as similar to skinning a bearskin rug. To get it, you need to skin the bear and flatten it out to a rug. That's what I do with models – I skin my model, flatten it out so that I can paint the texture on, and then wrap it back up again. Once I've done that, I'll put the model inside the game engine, light and bake it – or lightmap baking – I do this method to optimize the objects for people to experience.

What’s been the most awesome project you’ve ever worked on?

A big passion project of mine was called the Tall Tales of the Aerona Temple. I'm a big fan of monsters and creatures – I grew up watching 1920s and 50s films, black and white horror, Frankenstein, Dracula, big fan of Vincent Price and Bela Lugosi.

So, when I was in grad school, I wanted to create a story about a Sasquatch. And this Sasquatch – or Bigfoot, which is another name for him – fell in this underground temple and must find his way out. The temple told the story of his tribe and his people. There's a lot of backstories, I've made a language, there are hieroglyphics I invented. Unfortunately, the project didn't get finished, but it lives on in my demo reel as an environment that showcases what I can do.

That’s very cool. Taking a step back then, how did you make it here? How did you get to be building your own worlds like this?

I kind of fell into it! As a child, I was obsessed with new technology, like flying cars. I always thought gaming would be incredible in VR, but I never thought in my lifetime that VR would be back and would be as big as it is now. So when I found out there was an Oculus Developer Kit 2 (DK2) headset at my school, I thought, "I want to be a part of this!"

What are the skills you need to do what you do?

If it's an AR / VR designer, you want to learn a game engine like Unity or Unreal – and have some prior design experience. You also need to be able to 3D model and light your experiences.

But it really depends on the job description, as they can all be so different. I call myself an AR / VR designer "3D generalist" would be more accurate. I know others like to use XR designer, but I find the term XR confusing for general audiences. "AR/VR designer" kind of stuck because I feel like there's a better understanding of what AR and VR are. Ultimately, I create assets for immersive solutions, and as long as I communicate the skills I have to the people hiring me, it doesn't matter too much what I call myself.

On any given project, maybe the one you’re working on now, who are your closest collaborators? So who do you work with on a day-to-day or week-to-week basis?

I'll give an example of the team I'm currently on with Mend. We have an engineer, a game designer, an art director who does the concept art and designs the look and feel of the game; we have someone who works on the business side of things (but he has a developer background). Then there are two other 3D artists, including myself.

What do you love most about your work?

I love the feeling of being inside immersive tech and creating objects, environments, and worlds for it. It's a very transformative medium. It's almost like Legos in a way – but once you've built the world, you get to be the figurine inside it.

"Use whatever skills you have already. Whether you're more business-minded, whether you're more artistically inclined, or you have more of an engineering tech background, or even if you have a skill set that's different altogether, you can apply those skill sets into this field."

What’s the most challenging part of what you do?

The constant testing on everything! Things don't always work - there's technical issues, there's long loading times, there's light baking issues - and you are constantly testing and working out the problems.

It's like science, like a cycle - you make, create, test, research. And sometimes the cycle isn't exactly a circle - sometimes it feels more like a big scribble.

What do you hope for the future of the immersive space?

I'm just ready for one headset that does AR, VR, and MR! A headset that not only combats motion sickness to where it's not really an issue but is also extremely comfortable. I'm excited about the headsets that are lightweight and form-fitting, like sunglasses. Or even one that you don't need to wear a headset.

I'd like to see more quality experiences, like Half-Life: Alyx. Experiences that have incredible visual and sound design and give you goosebumps. I want to see more experiences that give you a sense of companionship – I love it when you're in games that don't make you feel super alone all the time.

What would you say to someone who wanted to do this role?

You can do anything if you're passionate about it. If you want to be a part of this industry – even if you're just curious – learn Unity or Unreal or other game engines. Create experiences - if it's your first time, it doesn't have to be super complicated, just a little mobile experience. If you do that, you have stepped in the immersive tech industry.

And use whatever skills you have already. Whether you're more business-minded, whether you're more artistically inclined, or you have more of an engineering tech background, or even if you have a skill set that's different altogether, you can apply those skill sets into this field.

You're constantly going to learn. I'm still learning, and it doesn't stop after school.

Read more about Mend, the game she’s working on now.