This games developer turned to enterprise for stability but still makes experience to help users feel like a badass.

Tell us about your role Jonathan – and how you got to where you are today?

I’m a software engineer and game designer. And I’ve been working on games and applications for over nine years altogether.

When I came into the industry, I was working in mobile games like Angry Birds, Temple Run, and all those for about four and a half years. Towards the end of that, a friend of mine reached out to me and asked me to work on this project. He didn’t tell me what it was, but he’s like, “Hey, there’s this cool VR thing that I’m doing. Do you want to try to work on it?” I was like, “Sure,” because I was curious about VR. So I joined the project, and it turned out to be Ghostbusters VR for the Google Cardboard. I got a chance to build a proton gun, which was very cool.

From there, I got hired by a studio called Relay Cars, where I was for about four and a half years. We created virtual vehicle showrooms for enterprise customers. I built a lot of experiences in that space – augmented reality, virtual reality, mixed reality stuff with the Magic Leap and HoloLens. We used a lot of new and emerging and exciting tech.

How did you get that first role?

I went to school for game programming. I had no clue what programming was when I enrolled in the program. I really struggled; it was hard to learn how to program for me, but eventually, around senior year, I kind of had an understanding. I filled out a bunch of resumes and ended up sending out about 300 resumes total to various game studios. I had 10 interviews, and it wasn’t till interview 11 that I actually got my job.

I was hired at a small studio called Sabre Tooth Interactive, working on an animal planet game for the very first iPad. I started out as a junior UI engineer and I was doing really basic stuff like, “Hey, put this text here, put this card image here, right? This panel should look like this. People should be able to click through it.” My role evolved over the years as they trusted me more and as I developed my skills. I started being able to contribute more to the team.

As someone who is clearly a huge games fan, why did you move into the role at Relay Cars?

In honesty and truth, stability. I love video games, that’s my passion, but it is not the most stable business. I don’t love how they treat the creators, and so all of that led me more towards enterprise work. In the first six months I was doing enterprise stuff I felt like a fish out of water because the pace of work was so different.

In video games, you can finish 100 things and feel like there’s 100 more to do at any time. In the enterprise space, it was very much more, “OK, this is what we’re going to focus on for the next month or two”. It’s just a lot less intense, and I think I got treated a lot better in those environments.

"Being able to communicate and ingest information from other people and understand their perspective and their goals are super valuable."

Do you think there are enough interesting opportunities beyond games for people like you?

Absolutely. I’ve seen an explosion of people interested in training simulations, especially for VR, AR, I think a lot of people are trying to make the next VR Zoom. It’s been really interesting seeing how we’re almost trying to recreate virtual versions of our real world. It still requires all the traditional game development skills.

Who are your closest collaborators in any given role?

That changes a lot, depending on the studio. In my very first game studio, we had a really tight-knit team. So the key contacts were my producer, my lead programmer, our lead designer, and then our tech artists and the other software engineers. I was in close communication with anyone who touched the game. More recently, when I got to enterprise, we hired more senior developers, so we wouldn’t have as many people touching the projects. Basically, if you were the developer on a project, you were also the designer and everything else too. We might talk to the creative director, we might have some conversations with our CEO for final sign-off, and we might have some conversations with the artists.

"I want my games to amplify whoever’s playing. The cool thing about VR is there’s an intimacy with your players, they get to experience your game and your vision firsthand in a way a lot of games can’t."

What skills do you think you need to be in your role now?

I know it’s really a cliché, but communication. The complicated thing that we usually don’t talk about when we’re developing games or applications is that you almost never build something for yourself. You’re always building for someone else, for someone else’s vision, you’re trying to cater to some audience, that’s not you. The product very rarely reflects you, and so being able to communicate and ingest information from other people and understand their perspective and their goals is super valuable.

So, communication first and foremost, because I’ve known a lot of really smart engineers who can code circles around anybody, but they’re very poor communicators. And that is unfortunate because they’re really talented. And then, secondly, the ability to organize and structure. Code is all about structuring systems, building out the functionality, and visualizing what needs to work.

When you’re working with junior developers and people who are coming into their first roles, what makes someone stand out to you?

Their portfolio. I didn’t have connections in the industry in the beginning, so the thing that got me in interviews was my really poorly constructed portfolio. I had three really rinky-dink projects from college, but it was enough to start a conversation with recruiters and the hiring managers.

If I meet somebody, and they’re like, “Oh, I really want to make games” and they’re already starting to put together a portfolio even if it doesn’t look great, even if it needs to be adjusted, even if it’s a little too wordy, or not well organized, that’s awesome. The first thing I look at it is, are you doing the work already? People pay us to make software, and the only way people know you can build software is if you build software.

I’ve met a lot of juniors who get frustrated with that advice, but the reality is, no one’s going to pay you to do something they don’t think and see that you can do.

What advice might you give to your younger self?

I’m a big believer that it only takes one yes to have your life change pretty monumentally.

I knew how to code, but it took a while for me to find a studio that accepted and appreciated my skill set. I had 10 interviews that went wrong, a lot of rough days, a lot of days wondering if I was doing the right thing, or if I was wasting my life. But it takes one yes, and then nine years later, here I am, I’m doing more than I ever could have dreamed of.

We’ve talked a lot about your official jobs, but what about side projects? Are you working on any?

I just released my first indie game called Galactic Bar Fight on the Oculus Quest. I realized I want to make VR that makes people feel like a badass. I want you to come home from work, you’ve been coding all day, you’ve been filing reports, etc. I want you to put on the headset and fire up one of my games, and I want you to turn into Neo and to just live in the idea that you’re this space badass.

I want my games to amplify whoever’s playing. The cool thing about VR is there’s an intimacy with your players, they get to experience your game and your vision firsthand in a way a lot of games can’t. 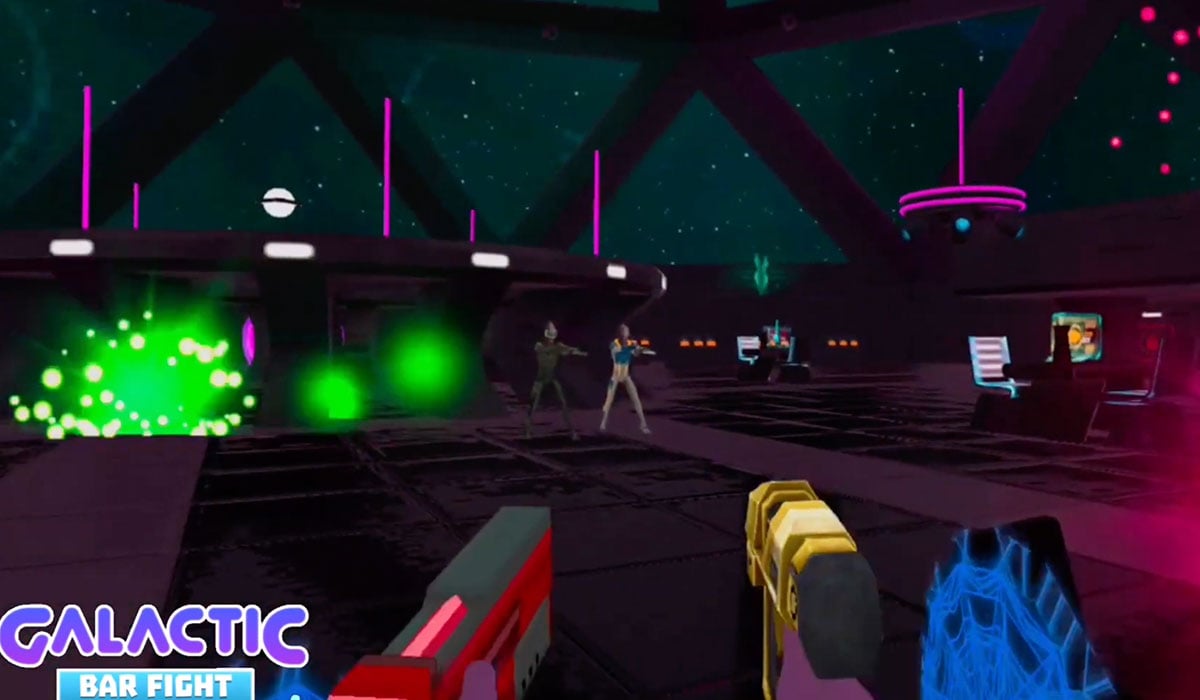 What are you excited about for the future?

I guess I’m excited to see how the future tech, in general, is used, adopted and embraced.

Niantic announced their HoloLens partnership this year with Pokemon Go. So, within five years a lot of people will have headsets on, walking around actually catching Pokemon in the real world, which is wild to conceive. The PS5 just announced this cool haptic controller that wraps around your hand, which is a lot more ergonomic and comfortable. And then the Quest keeps on getting smaller and the ecosystem is changing.

I’m a big fan of light fields to volumetric captures, and I think those are revolutionary because it that means we could record a concert and somebody could literally sit in the best seat in an arena with Ariana Grande or Travis Scott or whoever and sit there and move around and feel like they’re in the space in a really real way.

I think the five-year outlook for the whole space is pretty huge. There’s a lot of stuff that’s emerging and evolving and I look forward to seeing how it continues to blossom and grow.