This photographer became a programmer – and learnt so many of his skills were transferable. 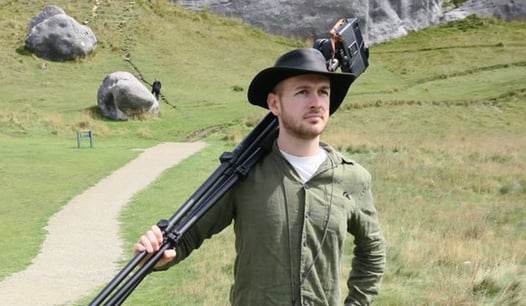 Tell us about what you do?

I am a junior programmer at MAGNOPUS, and I work in Unity and Unreal game engines. This year, I’ve been predominantly writing code, but last year, the project I was working on was at a later stage in development, so I was working more in the game engine itself. They both have parts that are very satisfying and parts that are frustrating in equal measure.

Give us a little overview of your career journey so far.

It depends on how far back you want to start! I trained as a photographer and was working as a photo lab technician for some high-end photographic printers, mainly doing prints for galleries and working with photographers to put on exhibitions. It was a very creative role, but in a totally different industry. The only software I used fairly regularly was Photoshop and Bridge for retouching.

I did some VR design evening classes as a hobby in 2016, because VR was a hot new thing. I got bitten pretty badly by the VR bug, and I thought I wanted to work in it, even though it involves making quite a big step down from where I was. Off the back of that, I started working at a VR studio but as a production assistant. I was doing everything from marketing reports to wrangling equipment to helping out on 360 shoots and making coffee.

I fully expected that with my photography background I would end up shooting 360 videos, and going into the editing, and composition side of things. But through that role, I ended up doing a lot of software testing, and I could see a project going from being something that barely runs in a headset, or would just crash immediately, to having 3D menus and levels and then build-up to the finished project. Seeing the software build-up, and seeing the kind of work that people in the development team were doing made me more interested in that side of the office.

"Don’t undervalue the soft skills that you have. The fact that you are easier to work with counts for a lot. And don’t think that you have to go to university to do this kind of stuff either. You don’t."

How did you get from that role to where you are now?

The next step there was actually I started doing some online courses where I got a taste of working in Unity game engine. I spoke to my old course leader about whether being a programmer could be an option for me and asked “Can I do this? Do I have to go back to university to do this?” And he said, no, that many people are self-taught. And he said, “Look at a couple of these courses, and if you can either finish those courses or if it doesn’t become boring to you after having done this, then that could be right for you.”

Along the way, I did a couple of unpaid internships while I was being supported by my girlfriend. I also went back to work for the same studio, but doing a kind of split role where I was part-time Unity developer, part-time IT support work. And that eventually transformed into then being a full-time junior developer.

Then I moved back to the UK, got a job with a studio in Shoreditch as a junior developer working on prototype projects. And then after that, I got this job with MAGNOPUS, and I’ve been here a year. MAGNOPUS has been my first job with a big studio where I feel like I’ve really made it.

That’s quite a transformation! What was the biggest challenge about going through that?

Taking quite a big step into the unknown to go and start a new path in a new industry, without knowing where it would end up. I didn’t even know what the job roles were, and I didn’t know that you could still be useful without having a university graduate level of knowledge. Having the patience to deal with times where you don’t progress as quickly as you’d like (working unpaid is quite strange when you’re used to supporting yourself! But it makes it even more satisfying when you get your first proper paycheque in a new field).

What do you love most about what you do now?

It’s the amount that I learn every week. You don’t really notice it on a week-by-week basis, or on a month-by-month basis, but I’m working on stuff now, which two months ago I thought would never come that easily to me. Since I’ve started working in full-time developer jobs, you are always surprising yourself with what you are working on, and how you eventually get your head around things, which in the start, just seem really unfathomable, and way too complicated. And then you slowly start to understand it all. It’s very rewarding.

What makes VR so special for you?

Part of the thing I always loved about working in photography was I had a really good head for technical knowledge and I always enjoyed the gear side of things. I used to work in a camera shop when I left uni. There’s a certain amount of that same enjoyment of memorizing detailed stuff, which is satisfying when someone is talking about something and you remember some scenario that you’ve covered before, and you’ve got something to add to the conversation.

I enjoy the fact that you can make something that will alter someone’s perception. All of the time I was a photographer, I was thinking – how can I communicate the idea that’s in my head to the person who’s looking at the photograph? When you’re working in VR, it’s an immersive thing that you’ve put someone into - you can shut out everything else that you don’t want them to see. You’ve got a narrative where you’re not limited to flat screens.

Trailer for BBC Home: A VR Spacewalk, a project that Jack worked on

What else have you taken from being a photographer that has helped you in this new role?

"You are always surprising yourself with what you are working on, and how you eventually get your head around things, which in the start, just seem really unfathomable, and way too complicated. And then you slowly start to understand it all. It’s very rewarding."

I really thought it was too late for me. I thought people who try and get into an industry like this will have already been writing code their whole lives. But that’s really not the case. Age doesn’t matter either. I thought that I was too far advanced in my niche to change careers and that it would be awkward being a junior with people who are much younger than me. But it isn't. Everyone is so helpful and supportive in this industry, especially in MAGNOPUS.

Don’t undervalue the soft skills that you may have over your younger colleagues. Life experience counts for a lot.  And don’t think that you have to go to university to do this kind of stuff either. You don’t.