Machine learning, 3D scanning, and AI is all in a day’s work for this creative technologist. 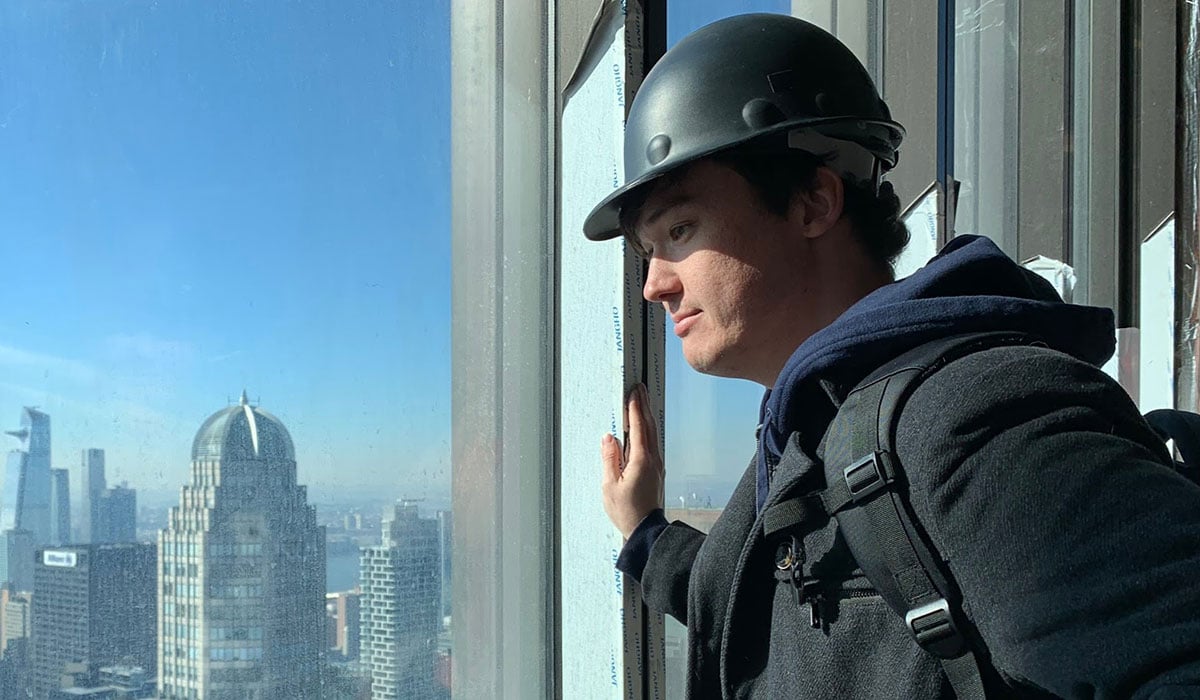 The best place for us to start is - what is it you do at SHoP?

This is always the hardest question for me. So, I’m a registered architect, but my actual job is largely about how architects use technology to improve the design process. That encompasses a really wide range of things because there’s not really any one way to go about design. It includes a lot of research and development into virtual and augmented reality, and computational design, design for manufacturing, and things like using software and algorithms to automatically generate the tens of thousands of parts that you need for parametric systems.

So, an example of that is a recent project called the Botswana Innovation Hub, which has a rain screen facade that comprises over 3000 mega panels. A thousand of those are unique mega panels. And so overall, each of those is comprised of an aluminum panel on the outside, but also the structure behind it – aluminum channels, gusset plates, bolts. Altogether, it’s probably 100,000 individual parts that are all slightly different from each other. It’s an impossible thing to model just on its own.

One of the things we’re able to do is build algorithms to generate those individual things to take into account, a wireframe system that changes and moves over the builds so that we can use a set of rules and parameters to drive creational geometry.

There’s also 3D scanning, there’s digitization, getting into AI and machine learning and deep learning, and looking into the applications for how that affects design as well.

Let’s take it back – how did you get to this really awesome and unusual job?

I studied for a Bachelor of Arts in Architecture at the University of Kentucky. My first year there was actually really awful, and I felt like I didn’t belong there at all. I didn’t feel like I had an artistic sensibility, I didn’t feel like I was good at drawing or creating physical models or any of that stuff. But in my second year there, we were introduced to software and computer-generated design. And that was something where I was much more intuitively and fluidly connected to it.

Where I was really struggling to get thoughts from my head onto paper, it was much easier for me to get them into a 3D virtual space. From there, I just wanted to follow all the threads that took me to, “well, I can model something in 3D, but it’s really slow with a mouse and keyboard. If I throw in a little script to do some of that, for me, that makes that part a lot easier.”

Tell us about the most exciting project you’ve worked on.

It’s the Intrepid Sea, Air, and Space Museum. It’s a museum in New York City made inside an aircraft carrier that was used in WWII and the Vietnam War. When it was decommissioned it was set up as a Living History Museum.

We were trying to understand ways to open up more of it to the public - to help the curators and the directors of the museum. Because of all this crazy web of interconnected networks inside it, we couldn’t understand it in two dimensions on a drawing. And so we proposed 3D scanning the entirety of the ship, which – for reference – is about the size of the Chrysler Building turned on its side. We gathered all the data about the ship itself and then started extracting data from that for specific spaces to do virtual and augmented reality experiences as a way to communicate what the ship is to the public.

This project combined a lot of different threads. There’s the 3D scanning, there was the VR and the AR, and then pushing that to other things like digital twins, and facilities management. When you have this kind of data accessible on, say a tablet, you can flag “Hey, we’ve got flooding on the bottom deck,” and then that can go to the maintenance teams, so they can come in and they can take care of it. It really shows how 3D data can really communicate so much better than 2D information. If you have the information there, you’re in a much more informed place to make decisions. 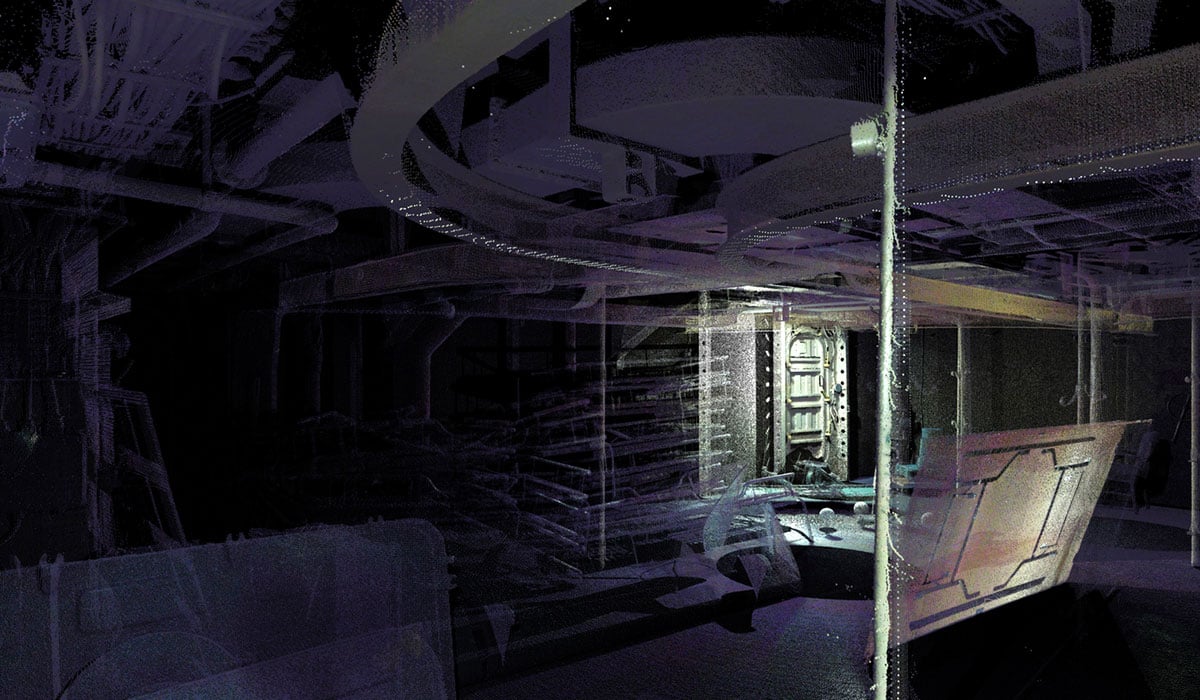 3D scan of the Intrepid Sea, Air, and Space Museum

Who did you work with on this project?

On the SHoP side, it was just a couple of people, because it was mainly a coordination conducting role, setting up a roadmap for how everything would take place. But overall, the team was much larger, of course, there were the people at the Intrepid who were applying for grants, there were the curators who were looking to understand how this information could go into the exhibition, planning how it can be used for exhibitions themselves. There was the facilities management team, who was looking to understand how the information could be used to help with the maintenance of the ship and the overall management of everything that was logistics and everything that was going on.

We worked with a company called Faro, which makes 3D scanners. We had to plan out how we could scan it all without having to close the museum – who we would bring in, when it would happen and how all of it could take place as you’re trying to load 3D scanners through tiny confined spaces and bring them into sometimes dangerous locations within the ship.

How long was this project?

It started a few years ago and it’s actually still ongoing!

What part of a project, or a workflow, do you get involved in?

I can come in at different times. It’s best if I can start from the very beginning to plan out a roadmap of what we can do for a project. But also, obviously, there are times when a design team gets stuck on something, and we’re looking for a specific solution to a specific problem, and so I can come in and help on some of that as well.

You’ve more recently started using real-time technology - Unreal and Unity. What has that allowed you to do?

What we’re trying to do is compress the time and effort that it takes to get from a concept in your mind into a finished project. So if you can immediately go from a 3D model to a really nice visualization that you can walk through, that you can put on a headset and see the full scale that has materials, that has physics, that has a sky that shows you different lighting conditions, that’s really valuable because it takes you from your thought to something you can see and experience right away.

So that’s one thing, but with Unreal and Unity you’ve got this whole scripting and coding interface, where you can start to bring interactivity into a project. You can explore kinematics or if something is moving throughout the building, or within the building, you can add data to the 3D objects so that you can look at something, touch it and pull up all the metadata that’s associated with it. You can know its name, its cost, its weight, its material, and you can potentially even affect that at the same time, exploring different design options within a single environment and also in tracking the lifecycle of the project throughout.

So, a single environment that is persistent and tracks your project from concept, design through all the different phases of a project to completion, and potentially even becoming a digital twin that can hand off to the owner so that they can use that for operations and in building management. It’s incredible.

"Have curiosity about how things work, and how they can be made to work better."

What advice would you give to someone who wants to do what you do?

Stay curious, because it’s very easy to find one thing and want to specialize on that one thing. And it’s honestly usually more profitable to become a specialist in a single field. But to me, that gets boring. I just want to learn a lot of different things. So, have curiosity about how things work, and how they can be made to work better.

I think it is really key to keeping up with the way technology is changing and to be able to really push it beyond what it is necessarily made to do and what it can do.

We’ve talked about what’s great about your role - but what’s the most challenging part of it?

All of it! When you’re always looking for the next new thing or looking at a new technology, there’s a lot of effort in sifting out things that aren’t going to work or that aren’t going anywhere. And there’s also the challenge of communicating things to other people, especially when those other people are very skeptical of technology or just don’t understand it.

Figuring out ways to package things into something that’s easily understood and digestible so that other people can see the potential of something and it doesn’t die because you’re not able to explain it well enough for somebody to understand what it can do for them.

What do you most enjoy about your job?

I think if I can continue to learn new things and to continue to grow as technology in the world is growing around me, I think that’s all I really want. I want to avoid getting stuck in my own ways or think that, oh, I’ve figured out the right way to do things, so that’s the way that I’m going to do them. Just want to make sure that I continue to push the boundaries of what we can do.

What are you most excited about for the future?

I’m most excited about the way that we can start to use AI and deep learning in much more practical ways, say, where you can much more freely model something and have the algorithms recognize what you’re doing and fill in the boring parts of it. For example, if I’m modeling a wall, they can recognize this is a wall and it can apply the spacing and the layers of drywall that you need, and the connections at the top and bottom. So, you are not having to do the really mundane things that come along with making the project work: generating door schedules, generating plumbing layouts etc. If I can just put a start location and an end location, and have the piping run through and figure out all the clashes for me, I think that’s really useful. It means you have more space to do the creative work of designing great spaces.