Why it takes so much more than having technical skills to “make magic happen”.

Hey Antonia! Thanks for being with us today. Tell us what you do.

I’m an XR technical specialist for industry at Unity, and my role is twofold. First is to create demos - so I code or build demos using a wide range of tools. Some are AR, some VR, and some are neither, or a mix of the two. The second is to deliver educational talks – either to clients one-to-one, or usually more broadly to a lot of people at once. In normal circumstances, I’d be traveling a lot to conferences – for now it’s a lot of online talks, webinars and videos. In the next two weeks, I’ve got a talk on automotive and hand tracking, a talk on how to use AR to bring animated film or TV characters into a user’s home. And then I’ve also got a talk coming up, which is about all of Unity’s XR solutions more broadly. It’s very varied.

Excellent. So how did you get this role? Let’s go back to the start of your career and talk about where you started.

My origins are not in computer science at all. My background is actually in biology and animal behavior. I was working in labs, publishing research – and then I got to the point where I realised that I liked talking about science more than I enjoyed being the person doing it. So I quit my PhD – which was a year into three years of funding – and I went into science communication.

Around the time I was thinking about changing careers, I did a TED talk about LGBTQ in the animal kingdom. That subject is really close to my heart, because I am a member of the LGBTQ community and because of my background in animal behavior. It centered around the way people use the word “unnatural” to kind of defend bigotry, and how that doesn’t make sense, because we see queerness, for want of a better word, in nature all the time. As part of that talk, I wanted to be clear about my own identity. But I wasn’t out to my family at the time. When I did come out, there were really negative repercussions, including having to stop contact with about half my family. Four years later I’m still not in contact with them – and part of that was their financial withdrawal of support.

Science communication and public speaking, unless you’re very big, are not very lucrative. So that’s one of the reasons I decided to go more into programming as a career and part of why I ended up where I am now.

After my PhD, I worked in zoos, science centers, discovery centers, and eventually a planetarium. It was the only 3D planetarium in the UK – a 12 meter spherical building with 3D projections on top. That’s where I learnt to code, albeit with a programming language specific to planetariums and astronomy.

I had the intuition that if I was creating the spherical 3D content that I should be able to create VR content too – but I needed a new language. So I started learning Unity. I started porting Unity content onto our dome, which meant we could go beyond astronomy. And putting the planetarium content onto VR headsets, which meant that it had mobility and could give access to more people.

What interested me most about VR is that you can create your own world. And in that world, you decide exactly who you are and what happens and the repercussions of that, everything from the mode of transport, to the surroundings, to the sound. You design it all. And that sense of control and decision making is something that was new to me and really beautiful.

And from there I ended up becoming a full time Unity developer in VR. I then went to Ultraleap, who specialise in hand tracking, and I kept doing public speaking on the sides as a freelancer. And then I got the call from Unity! My current job combines my technical skills and public speaking into one role. 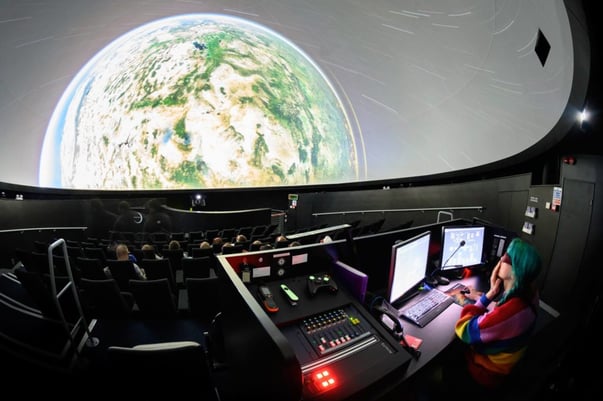 Antonia porting Unity content on a dome at a planetarium

That’s awesome. It seems like you have worked on a lot of brilliant projects. What has been your favourite?

There’s no end of incredible experiences. I use hand-tracking a lot, so I’ve created interactive movie posters that you can stand in front of and interact with. I also worked historically with haptics – so you can feel things that aren’t really there, which is pretty mind-blowing to me. A lot of them I can’t talk about.

But one of my favourites is what I’m working on now as a side project – an LGBTQ XR museum. I’m scanning items that are of personal significance to queer people in my local community using LiDAR and photogrammetry. Because of my history in museums and discovery centers, I’m very interested in who decides, who curates those spaces – who should decide what objects to showcase? How do we source these objects well?

To me, the idea of sourcing objects from a local community, asking them to explain its significance and putting that into a virtual space, is fascinating. I’m hoping to create two different experiences: one in VR, and one for web, so as many people as possible can access it.

There are obviously challenges in your work too. What are they?

Because of my training in science, I’m used to having to understand a very narrow thing very deeply. In my current position, and I think broadly in technology, it’s not like that. If you seek to understand every single thing, you will never progress enough to be able to use the tool. At first it was really uncomfortable for me to accept that I could use a tool – but not understand what exactly it was doing and why.

I’d also say imposter syndrome. I had and have continued to have very bad imposter syndrome. I knew about it, but for a long time I was convinced that I actually was an imposter. I used to Google things at work, and then use the mouse wheel to scroll out so the text was really small, so that no one could see what I was Googling because I thought it was too obvious. It’s kind of embarrassing to admit, but that was very normal for me.

It took me a long time to accept that I could ask for help, and I wasn’t going to get fired, I wasn’t going to get discovered as a fraud. As a woman in a male-dominated space, feelings of imposter syndrome or self-doubt are very common. But I also think it’s very common in tech too. Because you know there are things in there that you don’t know or understand, and you’re very aware of your own ignorance. Everything is changing constantly. The hardware available last year is not the same as the hardware available the year before. I actually think that’s a great leveler, because if someone has experience five years ago, that’s almost certainly out of date, and even two years ago, or even a year ago. Of course you can build on fundamental principles, but you have to keep learning.

There’s a Wallace and Gromit sketch of Gromit the dog on a train, and he’s putting the tracks down as the train rolls forward. That’s XR. Everyone is building the track as we go and try to figure out what works best, but no one is an expert in all things.

"When we create virtual worlds in particular, a whole world is coming out of the mind of a creator or a team of creators. If we don’t have diverse people creating those worlds, that’s a really troubling situation."

If no one can be an expert in everything, what do you think are essential skills that you would need to do the kind of role you do?

Enthusiasm for learning is number one. In XR, things will always change. I have to constantly learn new technologies - on almost a daily basis - particularly as Unity grows and has more partners and has more solutions.

People typically think that in XR, you have to do a lot of coding. Interestingly, for my role, I do code and I program, but I don’t think you have to. For a lot of XR experiences, there are tools where you can do a lot of things out of the box. So not being able to code or program isn’t necessarily a deal breaker. And even if you’re not good at maths, that’s also not a deal breaker either. Of course, if you’re the one building the tools, or putting together the hardware, or you’re building the software, yes, you need these skills. It will mean you can create more advanced and exciting experiences. But to build XR experiences, you don’t necessarily need a really deep understanding of things like vector maths.

Resilience too. I think the emotional challenge of becoming resilient enough to butt up against things you don’t understand every day is much harder than the actual technical obstacles. Particularly for marginalized demographics, whether that’s women or people of color, or LGBTQ people, or people with disabilities, or people who are neurodivergent or people who are of a different age to most of the people who they see around them, people who have a different educational or socio-economic background. Whatever that marginalized status is, they’re going to have more of an obstacle in terms of that resilience, because there are very real things like stereotype threat—if anyone reading, hasn’t heard of that, I highly recommend going away and looking at what stereotype threat is. It affects your belief in yourself, but also factual performance, there’s biases, there are very real obstacles.

It’s really important that we tackle this and make sure we’re overcoming it when we bring new people into XR. When we create virtual worlds in particular, a whole world is coming out of the mind of a creator or a team of creators. If we don’t have diverse people creating those worlds, that’s a really troubling situation where we’re truly immersed in the imagination of a very narrow demographic of person. It’s essential we have diverse creators.

So if someone was thinking about a career in 3D, what would you say to them?

Technology - and XR in particular - is going to become a bigger and bigger part of our everyday life. It's a fantastic field with a ton of opportunities, and really not enough people to fill them. The demand always outstrips the supply, so it means you’ll always be in demand.

From the point of view of someone learning it, I think it’s just a fantastic place to work. It might sound over the top, but for me being an XR creator is a little bit like sorcery, because you’re quite literally creating things that aren’t there. You’re creating a virtual world around yourself. And what is that, if not actual magic? So, I think it’s the most amazing superpower. I truly love it.

You can see more of Antonia’s work at Antoniaforster.com